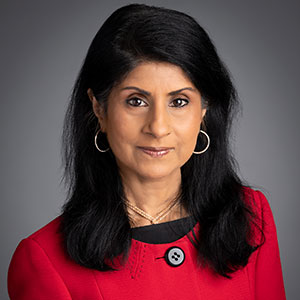 Latha Ramchand was appointed Executive Vice Chancellor and Provost at the University of Missouri (MU) in August 2018. Previously, Dr. Ramchand served at the University of Houston where she served as dean of the C.T. Bauer College of Business. During her tenure as dean, Bauer College grew enrollment to over 6,400 students, increased retention and graduation rates, raised over $73 million in funds, and established and named three endowed Centers of Excellence.

Dr. Ramchand is a CFA Charter Holder and serves on the Board of Directors of Insperity Inc. Dr. Ramchand holds a Ph.D. in Business Administration (Finance) from the Kellogg Graduate School of Business at Northwestern University.